As announced previously, we are very pleased and honoured to announce that on 6 October 2017 our Dr Andy Goodwin, Simon Ellis (Mott Macdonald), Prof Liz Laycock (Sheffield Hallam University) and Dr Chris Hurst (Mott MacDonald) were all awarded the Howard Medal by ICE Publishing for a paper jointly published in 2016.  The awards dinner was held in the ICE headquarters near Westminster. The happy recipients are shown below on stage, and both before and after perhaps a little too much champagne! 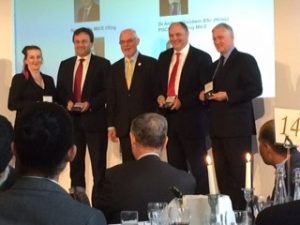 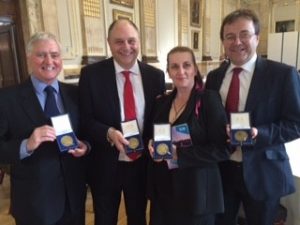 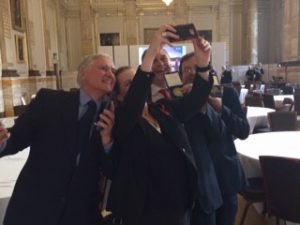 Entitled “Use of crushed brick in reinforced earth railway structures”, the paper was published in ICE’s Construction Materials Journal.  Targeted at improving the sustainability of the development, the work reported on a short practically-focused research project undertaken in association with Sheffield Hallam University with a clear focus on assessing the suitability of crushed bricks to be sourced from a viaduct for re-use as engineered fill.  It shows the benefits that can be gained from integrating focused research into a large project.

More details of the project can be seen in the paper, which can be downloaded for free from http://www.icevirtuallibrary.com/doi/10.1680/coma.15.00014.